Voiced by Idris Elba, the film hits cinemas around the rest of the world later this year and is one of the biggest budget documentary films ever produced.

Josh worked on Enchanted Kingdom 3D for 3 years as the Workflow and Media Supervisor and Lead D.I.T, creating the end to end workflow, and managing a team of D.I.T’s and Edit Assistants on locations throughout Africa and in the UK.

He also worked as a 2D and 3D time-lapse D.P, and self-shooting director on the ‘Making Of’ films.

Enchanted Kingdom 3D was shot all over Africa, and Josh worked on location in Ethiopia, Zimbabwe, Namibia, Tanzania and South Africa.

“It was a hell of an adventure!” 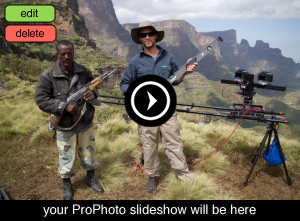